DiceFeud version 1.5 is out, version 1.6 coming up

I forgot to write something here about version 1.5 when it was out a few weeks back. I was quite happy with that version since it brough a bit more life to the app. The dice are animated and the statistics for the paid version look a little better: 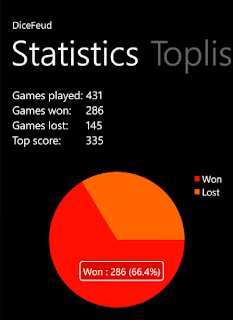 Peter Drougge created the animation for the Win8 version and I just took it from there.

One improvement in version 1.5 is that the rolling and randomizing is performed on the server instead of at the phone. I hade to implement this to prevent cheating when the game is out on more platforms. If I hadn't, then a player would have been able to roll three rolls on each platform and then submit the best score to the server. Big no-no.

I added sounds - one sound for rolling and a small applause when rolling Yatzy - and I added shake-to-roll functionality. Both sounds and shake-to-roll can be switched on/off in the Settings view.

I figured I should have those features to make it all a little more professional. One user has complained about  the sounds muting the music player on the phone. He is right and I hadn't tested that. It shuts other running sounds down and I should come up with some better idea. I use mp3-files and the Xna.MediaPlayer object for the app-sounds  and I suppose that's just how the MediaPlayer object works. I'll look around to see if there is another way. So far I haven't found any other way to play mp3-files and I am reluctant to ship the app with non-compressed sound files because of the size.

I have now submitted a new version. It is not that much going on here. The main feature is a new icon which was created by a pro, Malin Strandli, who I worked with some ten years ago. I was really cool to catch up with her again and in one hour she whipped up what I could never do: 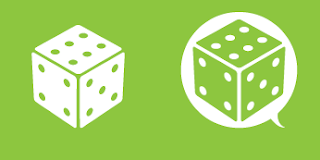 The left one is the default icon, and the right one is the tile icon when you have new unread chat messages. I am not sure if this is going to be the background color, but I really like the look of the actual icons.

Also, I added some more statistics for premium users. The current all-time-high top list is very static and I added daily and weekly toplists along with push notifications to players making it to one of the lists.
Yes, it is a cheap shot in trying to make more people buy the app but it adds a little value which I would like to have if I paid for it.

The new version is not approved yet but I think it will be soon since it isn't that much new functionality in it.

John Hård
Programmer living in Stockholm, Sweden, with my family. Focusing on .NET and distributed systems. The blog is about a game, DiceFeud, which I started writing for Windows Phone in spring 2012.