New version of DiceFeud out now

The new version is out now and it looks great. Big thanks to Peter Drougge for layout improvements.
In the new version. I had a few complaints about placing a score on the score board in the last version. If you accindentally pointed wrong you could end up setting your Yatzy on Chance instead. In the new version that won't happen since you need to confirm your move with a tap on the confirm-button in the application bar: 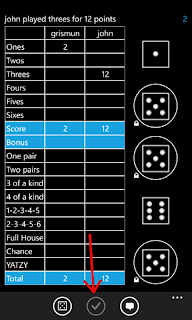 There is also a high score list and your basic statistics, but only in the premium version. I have to try to add som value to DiceFeud Premium since the ad revenue from the free version is virtually nothing. Now that Marketplace has taken off, with more that 100 000 apps available, your app don't show as many ads as it did before since all apps using the Microsoft Advertising component seem to compete for showing ads, and the ad sales haven't increased as much as the number of apps have.

Exciting times for DiceFeud. The app is taking it's first baby steps towards a Windows 8 desktop version. More on that when we have something to show.

John Hård
Programmer living in Stockholm, Sweden, with my family. Focusing on .NET and distributed systems. The blog is about a game, DiceFeud, which I started writing for Windows Phone in spring 2012.